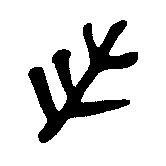 The Elder Sign is a line with five branches, invested with spiritual energy (2 POW). The drawing to the right is how Lovecraft initially pictured it. It is a potent protection against the servants of the Great Old Ones when prominently displayed, for they yet remember the power of the Elder Gods, who fought against the Great Old Ones. One of the powerful Great Old Ones (including Cthulhu) might be restrained by the Sign as well, but probably only briefly. The Sign has no effect on the Outer Gods, Elder Gods, or the Great Ones, though the Elder Gods may look upon one who wears it with favor. A description of these various classifications of Mythos deities can be found at https://en.wikipedia.org/wiki/Cthulhu_Mythos_deities  A great deal of mischief is occasioned by the servants of the Great Old Ones, so the Sign is of use to adventurers. Deep Ones and Byakhee are the most common servitor races to be affected. The Sign is usually inscribed on a stone to block the passage of those servants. Most Keepers do not allow it to be worn as a large necklace, as headgear, or emblazoned on a metal shield, but I do. The wearer should remember it must be displayed prominently to have an effect, and that the Sign is hated by the Great Old Ones, who may go out of their way to annihilate it and anyone who may wear it.  Do not depend on it too much!

Please note that COC 5th & 6th edition have a very different interpretation of the Sign, one that to me diminishes the nature of the Sign in Lovecraft and Derleth’s writings. Derleth’s description of the battles between the Great Old Ones and the Elder Gods are compelling enough to me that I use those as a basis for the Sign’s efficacy. For a thorough discussion of the Sign’s efficacy as allowed in recent editions of COC, with which I wholly disagree, see https://www.yog-sothoth.com/forums/topic/23387-newbie-effects-of-an-elder-sign/

Other protective charms that might be encountered in COC include the Star Stones of M’nar, the Seal of Isis, and Prinn’s Crux Ansata. Other possibilities include the Seal of Solomon, the Charm of Seven Paters, or some of the protective charms in Harry Potter’s universe (http://harrypotter.wikia.com/wiki/Protective_enchantments). I’m sure the mere mention of Potter will scandalize most COC players.

An old gamer flying his freak flag, I've been playing table-top role-playing games since 1978. I've been building my own system (Journeyman) since 1981.
View all posts by lostdelights →
This entry was posted in Call of Cthulhu, Thoughts. Bookmark the permalink.