I’ve done this before (Part I, Part II) but it is a perennial topic, so here we go again.

This time, I’m inspired by a post by Grant on his LookRobot blog. There’s a squeaky clean version and a naughty bits version. Read either one and then come back for the debrief, ok?

Points 1 & 2 are pretty basic roleplaying advice. Do stuff, and be sure you tell others what you are doing. Sounds simple right? Because Grant assumes that you will be playing a character, not just a guy with a gun. You could follow his first two points pretty easily either way, but like Grant, I think that the fun is in the character building AND in the gun play (or sword play or whatever). If there is no character development, you’re wargaming, not roleplaying. That’s fine, but it’s not what I or Grant are into. After the first year or so of blowing stuff up, the joy paled for me and I wanted something more nuanced. I know folks who have played for years, love blowing stuff up, and have no interest in character development. I think it often depends on what your day job is!

Points 3 & 4 would be familiar to anyone doing Improv. Improv is a collaborative creative exercise, much like role-playing. One plays off what one is given, rather than blocking the action, which kills the fun.

Point 5 is generally true, but not always. According to John Mann’s article, “Experimental Evaluations of Role-Playing,” in the Psychological Bulletin (1956), roleplayers can get positive transfer from their virtual lives to their parallel lives through the acquisition of knowledge, development of skills, and development of emotional assertiveness. Their fantasy worlds also offers comfort that the real world can’t, in that they can find social support in the virtual world. Gaming as a group does that, if the group can get along. Also, it can be difficult finding new players these days, so it pays to keep everyone happy so the group remains viable. That’s one reason I prefer playing in the lawful good to neutral good to neutral quadrant of the alignment chart. 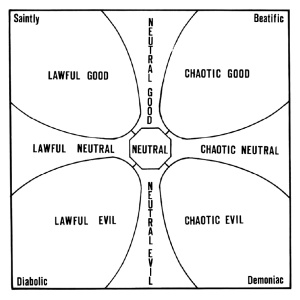 Now, I’m sure there are evil parties that have not self-destructed, but I haven’t seen them yet. Unless everyone is lawful evil, greed and evil are a dangerous combination. I should know, I managed to kill off an entire party that way once, and no-one realized it until the last one was under the knife.

Even more annoying than an evil party is a greedy party that just thinks it is evil. Instead, they are selfish, don’t help each other, steal stuff from everyone, and play hurtful pranks on each other. You can tell they aren’t truly evil because they don’t go out of their way to torture small children or rape anything that stands still long enough. No, they are “Greedy Neutral” and use their evil as an excuse. I’ve been in those and didn’t enjoy it. Just my opinion, of course! Your mileage may vary.

If you want to get deeper into all of this, you should read Markus Montola’s “The Invisible Rules of Role-Playing” in issue 1 of the International Journal of Role-Playing (IJRP). Montola makes a differentiation between exogenous and endogenous rules, and also diegetic rules and goals. Exogenous and Endogenous are just IC (in character) and OOC (out of character). Diegetic refers to the internal rules of the particular fantasy world in which one is playing. Aside from the desire to use the biggest words possible, the article is quite insightful.

Mikko Meriläinen surveyed 161 Finnish role-players for “The self-perceived effects of the role-playing hobby on personal development” in issue 3 of the IJRP. Some of the results were that most people (43.5%) though the social situation and game content were equally important to a role-playing session. The results also showed that experimentation with social roles was a key element in gaming, so just because a player’s character is unpleasant does not mean the person himself is.

Finally, Sarah Lynne Bowman has some wonderful insights in “Social Conflict in Role-Playing Communities” in issue 4 of the IJRP. I highly recommend reading this one in full! Here’s a bit of her abstract: “Emergent themes for sources of conflict included general problems inherent to group behavior, such as schisms, Internet communication, and intimate relationships. Other sources of conflict unique to the role-playing experience included creative agenda differences, the game master/player power differential, and the phenomenon of bleed, both in- and out-of-game. Potentially conflict-inducing play styles included long-term immersion into character, campaign-style, and competitive play.” My favorite piece of the article is when she talks about “Bleed-in” where OOC conflict bleeds into the game (and gives examples) and “Bleed-out” where IC conflict bleeds out to the real world. Here’s her tables on the two types. 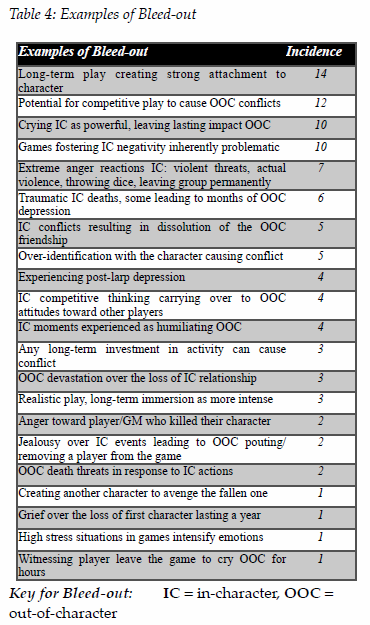 Great stuff, eh? To me, this hammers home the point about evil parties as being mostly dysfunctional. They offer more chances for hurting others, particularly because people usually care deeply about their characters and IC unpleasantness can affect the real world. Nobody needs that from a game!

Back to Grant. The other rules are pretty self-explanatory, except for point 8, which I really love. Essentially, if you have made someone uncomfortable (either OOC or IC), stop and be nice. Talk it out. Don’t do it again. Be social, in other words. I suppose one could include “remember to bathe” under this one as well. Except at Gen Con of course. 🙂

An old gamer flying his freak flag, I've been playing table-top role-playing games since 1978. I've been building my own system (Journeyman) since 1981.
View all posts by lostdelights →
This entry was posted in Advice to Beginners, RPG Theory, Thoughts. Bookmark the permalink.